The most comprehensive guide to baby bibs you will ever read! Find the best bib to keep your drooling baby dry and happy. 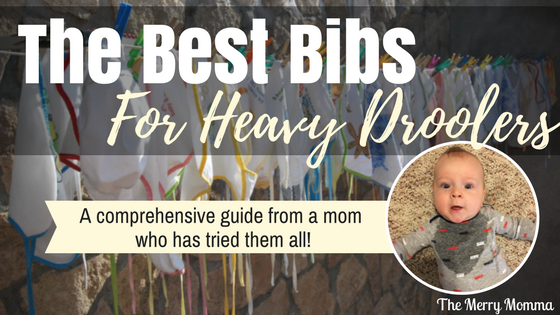 Baby drool is no joke. For as little as they are, those tiny little humans can produce a shocking amount of slobber. Which you wouldn’t think would be that big of a problem … until you’re the one having to change multiple outfits every single day because your baby soaks them all.

I know because I have one of those heavy droolers.

Our first son, Aidan, barely drooled, even while teething. Then his brother, Andrew, came along, and oh golly. That kid drooled like no other baby I’ve ever seen. He went through upwards of half a dozen bibs in single outings. People were constantly saying, “Oh, he must be getting some teeth.” And I would always say, “Nope. That’s just him.”

(Funny story — Andrew’s full name is Andrew Lee. We originally wanted to name him Drew with the family middle name of Lee, but we thought Drew Lee was a terrible combination (say it out loud if you don’t get it). So we went with Andrew instead of Drew. Now we see that our original choice was eerily prophetic.)

So, needless to say, we tried our fair share of bibs. I had to keep buying more because I couldn’t wash them fast enough! And every time I bought a new bib or set of bibs, I tried something a little different.

As a result, by the time Andrew turned one last fall (and was still wearing bibs, by the way), I became somewhat of an expert on bibs.

I kept joking that one day I would write a blog post on my favorite bibs since we were so familiar with them. I recently realized that I never did, so I decided I would do it now.

And once I started writing, I couldn’t stop, and the simple blog post of my favorite bibs turned into an epic treatise of all things bib. My magnum opus of bibs, if you will.

Whether you’re a new parent, a soon-to-be parent, a parent of a drooler, a grandparent, or just someone who finds themselves buying a lot of baby gifts, this is a post that you must check out before ever buying another bib. It’s certainly not the final word on bibs, and my tastes may be completely different from another mom’s, but it will certainly make you the most well-informed bib shopper in the aisles of your local Target.

WHAT SHOULD I LOOK FOR IN BABY BIBS?

Most bibs for drooling are either a terry knit, cotton, or cotton-poly blend. Some may have a plastic or fleece layer, as well, for better absorbency. Of the three materials, the terry bibs seemed to be most absorbent for us. Next were the cotton-poly blends.

But it was the cotton ones that were best for Andrew’s skin. That was a very big deal to us because he had a terrible time with eczema throughout his first winter. Once he got a little older and his eczema cleared up a bit, the terry cloth and cotton-poly bibs worked just fine. But until then, we stuck to the 100% cotton ones.

We found that more than the type of material, what really made the biggest difference was how many layers the bibs had. A single-layer bib of any material was definitely not going to cut it. They were no match for the Niagara Falls that was Andrew’s drool. Even the double layer bibs didn’t hold up for long.

What worked best was a double layer of cotton, terry, or cotton-poly with either a plastic or fiber filling middle layer.

I know a lot of people who swear by the terry/plastic combo bibs (Greensprouts is a very popular brand), but we didn’t care for that kind. We did like that the plastic kept the drool from soaking through to his shirt (I can’t tell you how many times we had to change his shirts!), but the top layer never seemed to absorb enough of the drool, so it often ran right over the bib onto his lower shirt or pants. Plus, they just weren’t very comfortable, and they never stayed in place.

We had pretty good success with the double-layer bibs with fiber filling. They feel like a really thick terry cloth towel, and they’re very absorbent. These bibs lasted a long time before needing to be changed. And they held up well to both the washing machine and the dryer. The only downside was that the outer material was too rough for Andrew as an infant and chafed his super-sensitive skin.

Our favorite bibs were these 100% organic cotton bibs with fleece backing. The fleece backing made them much more absorbent than the single or double cotton layer bibs, and it was much more comfortable than the ones with plastic layers. They didn’t last quite as long as the fiber filling kind, but the cotton was so much better for Andrew’s skin.

Okay, I said those were our favorites, but that’s not quite true. My all-time favorite bib material was muslin. Muslin is a lightweight cotton that is suuuuuper soft and surprisingly absorbent. I loved how soft they were, how well they held up to LOTS of machine washings, and how easy they were on Andrew’s skin. The only downside, and the reason Andrew didn’t have many of these, is that they’re a bit pricier than the other kinds. I happened to snag some from ALDI one day, and I wish I had stocked up!

Okay, now let’s talk closures. We’ll start with my least favorite: buttons. We have one set with buttons, and I hate them. They’re not very convenient when you’re trying to wrangle a squirmy baby, and the ones we have didn’t like to stay fastened. I won’t go with buttons again.

Between snaps and Velcro, I’m torn. I know that a lot of people looooove Velcro, and yes, it is super convenient. But it also snags hair (Andrew’s long curls were forever getting caught in the Velcro), and it snags clothes in the wash if you don’t remember to close them before you stick them in the machine.

I think I actually preferred the snaps. I know some people don’t like snaps at all, but I didn’t mind them. They were a little more difficult to fasten quickly (again – squirmy baby), but not bad. And I liked that they stayed fastened. They also weren’t so apt to get hair caught in them, and they never snagged my clothes.

What I really really really loved were the bibs that had multiple snaps. Since Andrew was a heavy drooler from infancy to well past his first year, this was a big deal for us. Obviously, you don’t want the bib to choke an older baby (or one with a chubby neck), but a bib that is too loose is pretty much useless because all the drool will run down the exposed area between neck and bib (I speak from experience here). So having multiple closures that grow with your baby is golden! And I think I only saw this feature with snaps.

Finally, I want to make note of a couple additional features.

First up are bibs with teething ends. It sounds like a phenomenal idea, and Andrew did LOVE the teething ends, but the ones we had were only a double layer of cotton so they did not last long. Like, a car ride into town is about all we could get out of them. But here are some that should be more absorbent.

Next, I want to comment on my favorite shape of bibs. I love love loved Andrew’s bandana bibs. They were a perfect shape and size. They were wide enough at the top that they caught all the drool, even when he turned his head, but the taper prevented them from getting in his way. Plus they stayed in place so much better than the square bibs did.

I also thought they looked cuter and less obtrusive than the square bibs. It was easier to blend them into his outfits and they made him look a little nicer. That may sound superficial, but hey, when you have a baby who has to wear a bib every single day for over a year, you kind of want him to be able to look good while doing it.

For home use (i.e. when not in public), I also loooooved our drape-style bibs (the muslin ones from ALDI). They look a little funny, and I wasn’t sure if Andrew would go for them at first, but they were fantastic! They were ideal for maximum slobber protection. They can also double as burp cloths, so that’s pretty handy. I love anything with a dual purpose!

Now that I’ve given my full synopsis of just about every kind of bib known to man, I’m going to share with you our three favorite bibs and why we loved them.

They are currently unavailable on Amazon, but this set looks very similar:

Best bang for your buck

If money is no object, these are the bibs I would choose.

I got ours from ALDI, but there are plenty to choose from on Amazon:

>>> Add these bibs and more to your Amazon Baby Registry! <<<

When you have a heavy drooler, you find out pretty quickly that you can’t mess around with sub-par bibs. You don’t want to waste time or money on bibs that aren’t going to stand up against serious slobber. Nope, cute little piddly single-layer cotton bibs are not going to cut it for your drool-machine. You’re going to need the best of the best.

And since Andrew was the king of drool, I’m pretty confident in my ability to steer you in the right direction. Or at least give you all the information you need (and then some) to make a well-informed decision.

Whether you’re looking for yourself or someone else, I hope this leads you to the perfect bib. Happy shopping!