Does your small child make grocery shopping a battle of epic proportions? You’re not alone! Mine did, too, until I started using this one small trick. 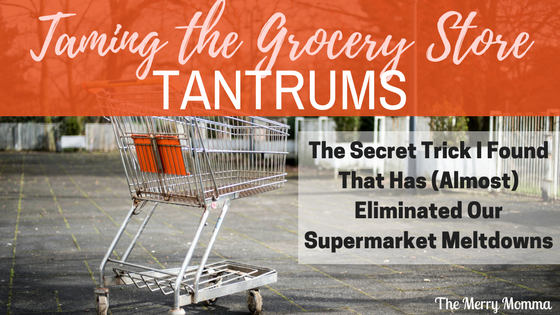 When I only had my first child, Aidan, grocery shopping was a wonderful bonding opportunity. We both loved it. On the occasional trip that I went alone, I actually found myself missing his company.

We talked as we shopped (or I did, at least, and he listened), we sang to the music, and when there weren’t a lot of people around, we zipped our cart down the aisles.

Aidan was a perfect gentleman to everyone we passed, and I basked in how wonderfully behaved everyone thought he was.

And then we had Andrew.

Things started changing after Andrew was born and I couldn’t give my full attention to Aidan anymore. He began to get whinier and throw more tantrums.

But Aidan really became a loose cannon once Andrew transitioned to the seat of the cart. After that, he had to either ride in the cart (which didn’t leave much room for food) or walk along the side.

He sometimes did okay staying by my side, but I never knew what to expect. Without warning some days he would run off, laughing as though it were a game, or throw a colossal fit in the middle of the store.

It was frustrating and embarrassing, and I started to dread grocery shopping.

And then one day I figured out what was behind the tantrums, and I tested out my theory with a new approach.

Within one shopping trip, things changed. The tantrums didn’t completely disappear overnight, and I definitely still had to (have to!) work on teaching him obedience and respect, but they became much more manageable and less frequent. Now, several months later, while our grocery excursions are not perfect, they are 100 times better than what they used to be.

Here is my trick to taming the supermarket meltdowns!

A year into the tantrum-infused grocery outings, I finally figured out the problem. He gets bored!

On our grocery days, we go to two stores. He was almost always an absolute peach at the first store. But when we went to the second, another little boy would invade his body. This other little boy was loud and whiney and disobedient. The difference between the two stores was like Jekyll and Hyde.

I used to wonder what the difference was, and I had even asked Aidan why he was so good in one store but so naughty in the other. I wanted to tell all the “bad store” employees, who only ever saw his fits, “You should see him in Hy-Vee! I swear he’s a good boy!” (But that would feed into my temptations to discipline to look good for others.)

One day, a couple of months back, as Aidan stood in the middle of the aisle and refused to continue, he threw back his head and said, “I’m tired of grocery shopping! I want to go home!”

Then it dawned on me.

There was nothing really different about ALDI that was causing Aidan’s fits — it was the fact that it was the second store. He was bored and tired of watching me make decision after decision.

Once I diagnosed the problem, I set out to find a solution. Going by myself is not usually a good option because of my schedule and ALDI’s hours. And I did not want to have to make separate trips into town to split up the stores on different days. I also already have a fairly short grocery list each week, so I couldn’t really make it go any faster.

I needed to find another solution where I could still go to both stores, but Aidan wouldn’t get so bored.

That’s when I discovered this trick:

THE TRICK TO TANTRUM-FREE (OR REDUCED) GROCERY SHOPPING

Involve him as much as possible!

Aidan is very relational (especially with me), and he loves to be a big helper. He likes to be asked his opinion about things, and he enjoys feeling important. Knowing these things about him, I started getting him more involved in the shopping.

As we enter the store, I say things like, “Let’s get out our list. What do you think we should get today?” Quite often he says things that I don’t actually get (one day his list was green beans, chocolate, and meatballs), but he’s starting to learn some our staples that we get every week.

For each item on our list, I ask him if he’ll help me pick out the best one. He is almost always eager to lend his expert opinion. Sometimes he doesn’t choose well, but I either let it go and take his selection for the good of the cause, use it as a lesson in picking out food (no, see, we don’t want the ones with mold on them), or … I swap them out when he’s not looking. 😉

IT’S NOT A UNIVERSAL MIRACLE CURE … BUT IT HAS WORKED FOR US!

I realize that this isn’t going to work with every kid. A lot of parenting methods depend a great deal on the child’s particular personality and temperament. Aidan happens to really like being a helper and feeling important. That’s not a big deal to every kid.

But I know that this has worked wonders for us, and I have a feeling it will work for a lot of other kids, too.

So much of kids’ worlds at this age are dictated by adults, and sometimes power struggles ensue because they’re dying for a little power of their own.

Offering them opportunities like these to make decisions and be the advisor gives them a chance to exert that power in constructive ways. (Or so I’ve been told. My oldest is 3, so I’m just starting to learn this from experience.)

I won’t lie and say that it has eliminated all tantrums and bad attitudes from our grocery shopping excursions (our next trip would probably be a doozy if I did, haha). But it has drastically reduced them and made getting groceries much more bearable for both Aidan and me.

Now we just have to see what happens when Andrew gets to be this age and they both want to pick the best head of broccoli. But I’ll cross that bridge when we get there … 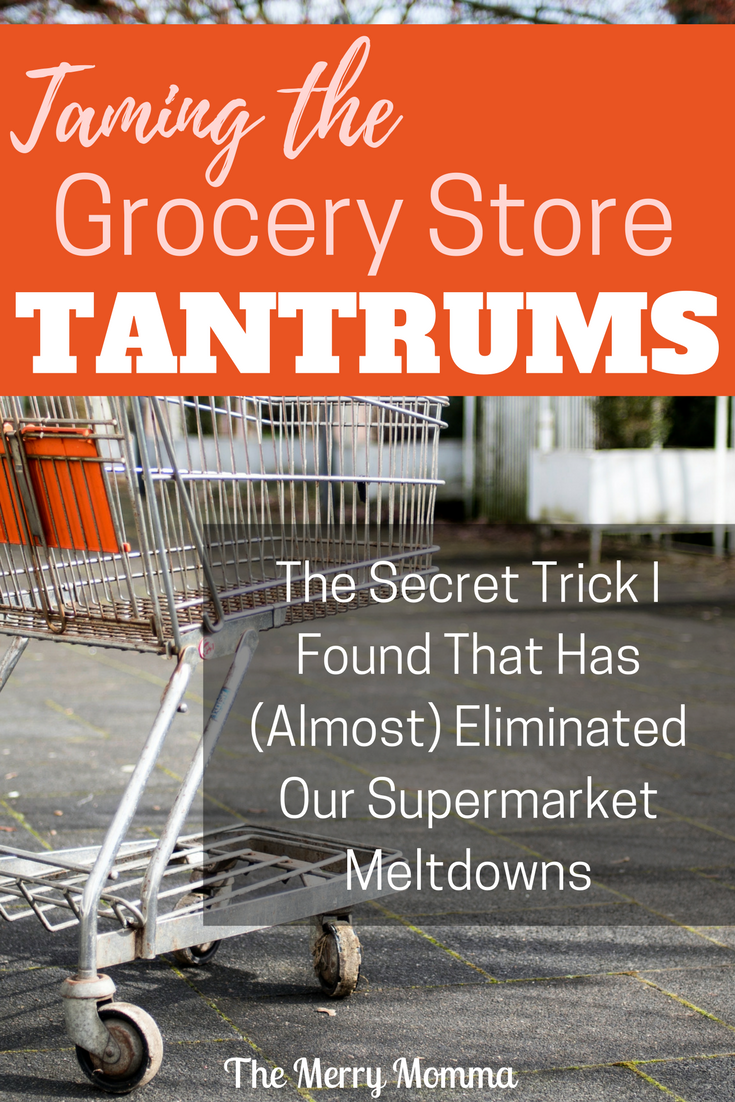