My family lives on an acreage in rural Iowa. We can’t go anywhere without passing a few fields of corn and beans. And for the past couple of months, those fields have been full of combines and other machines harvesting their precious yields.

Aidan loves watching the machines. He points out each and every combine along the way as we travel our back roads. He is fascinated with big machinery, and it’s not unheard of for him to ask me to stop so he can watch them work.

Reaping what has been sown. Hard work paying off. What a sweet, sweet moment of reward to gather the harvest of the seeds you planted and poured your heart and soul (and money … and tears …) into months before.

These are the days that make the long hours of toil and determination worth it. The harvest is the reason they plant.

I think you see where I’m going with this. Just as our local farmers are enjoying the payoffs of a great harvest after months of hard work, so do parents (eventually) enjoy the fruits of their labor. And that is what this month’s “What I Love About Motherhood” is all about — the harvest. 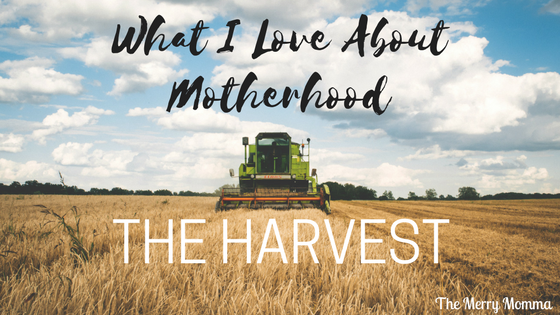 Aidan was, for the most part, a pretty easy two-year-old. You always hear about the “Terrible Two’s” (although my friend Denise has an awesome alternative for that phrase!), but we didn’t find them to be terrible at all. In fact, we really enjoyed that age. He was starting to really talk and play, be a fun companion, and do a lot more things for himself. “We got off pretty easy,” we would often say to ourselves.

Then three came. And oh, that’s where the tantrums were hiding. They were lying in wait, ready to pounce as soon as we had comfortably settled into a false sense of security. A few months before his third birthday, it was like a switch flipped, and suddenly he became a completely different boy. One that tested me daily. (Hourly … minute-by-minute … )

I say that not to disparage Aidan. As you know, if you read my post about calling our kids names, I feel quite strongly about watching what I say about my kids. But it was my reality that Aidan began to really develop — and assert — his strong will during that time.

I don’t consider that a fault. In fact, a strong will can be a very positive trait when guided by godly character and self-control. But while they’re learning those two things, it can be quite an exhausting time for Mom. And it definitely was for me.

The Battle Is On

I knew that because he was strong-willed, I absolutely had to stay strong myself. I picked my battles carefully, but once a battle began, I had to win. Every loss meant lost ground and a tougher battle the next time. This was something I knew as we entered those training years. But I didn’t know just how hard it would be.

After several months of daily battles — hours spent correcting and disciplining — I grew very weary. I was so tired of battling. Tired of disciplining. Tired of butting heads about everything. And I began to give in.

It was just little concessions here and there, and I didn’t think they would really matter. But every time he got his way from throwing a fit, he learned to do it again. And again. And again. And each time I gave in, my authority eroded a little more. Until we came to a day when I sobbed on  Levon’s shoulder out of exhaustion, frustration, and embarrassment that Aidan didn’t listen to a word I said.

Levon was kind and sympathetic. He apologized for Aidan’s stubborn genes (a tongue-in-cheek, but valid, point), and reassured me that I was a good mom. But he also told me the hard truth — Aidan knew he could push me around. He knew he could “out-stubborn” me.

I didn’t necessarily like hearing it, but I knew he was right. Months of battles had worn me down, and I was surrendering much too often. My discipline wasn’t effective because it wasn’t consistent. It was time to reclaim lost ground.

So for the next several months, I worked on being more consistent. I was careful not to make threats I couldn’t follow through with, and I tried to be quick to correct any disobedience with actual consequences (not just words, which, in my fatigue, I had been relying on, and which, surprise surprise, did not work). Any time I was tempted to give in just to restore peace and/or quiet, I reminded myself that every step back would be that much harder to recover the next time.

We still butted heads and Aidan still disobeyed and threw tantrums. A lot. It seemed like all my efforts were making zero difference.

And then a couple weeks ago, I told him he couldn’t do something, and instead of throwing a fit, he simply said, “Okay,” and went about his business.

It caught me completely off-guard. I stood there and blinked for a few seconds. And then I realized that there had been quite a few moments like that lately. He had been quicker to obey and less argumentative. Even my mom had been commenting on good his behavior had been.

He’s not perfect. Not even close. There are still tantrums and meltdowns, angry outbursts and direct defiance. But they are slowly but surely being outweighed by the moments of obedience and self-control. I’m seeing the first hopeful signs of something that for awhile I never thought I would experience — fruit. I’ve sown the seeds, now I’m starting to reap the harvest.

A farmer doesn’t plant a crop and then call it a year after the first plant begins to emerge. He doesn’t sit back and relax and say, “Well, my work is done.” Neither does he retire after one successful harvest, but rather repeats the process year after year after year.

In the same way, I know that my work is not over but simply just beginning. I have only traveled in inch in the marathon set before me.

But just as a good harvest whets a farmer’s appetite for the next planting, so this recent progress energizes me for the next round. I have seen that good fruit does eventually come from dutiful sowing, and it makes me all the more excited to plant the next seeds. 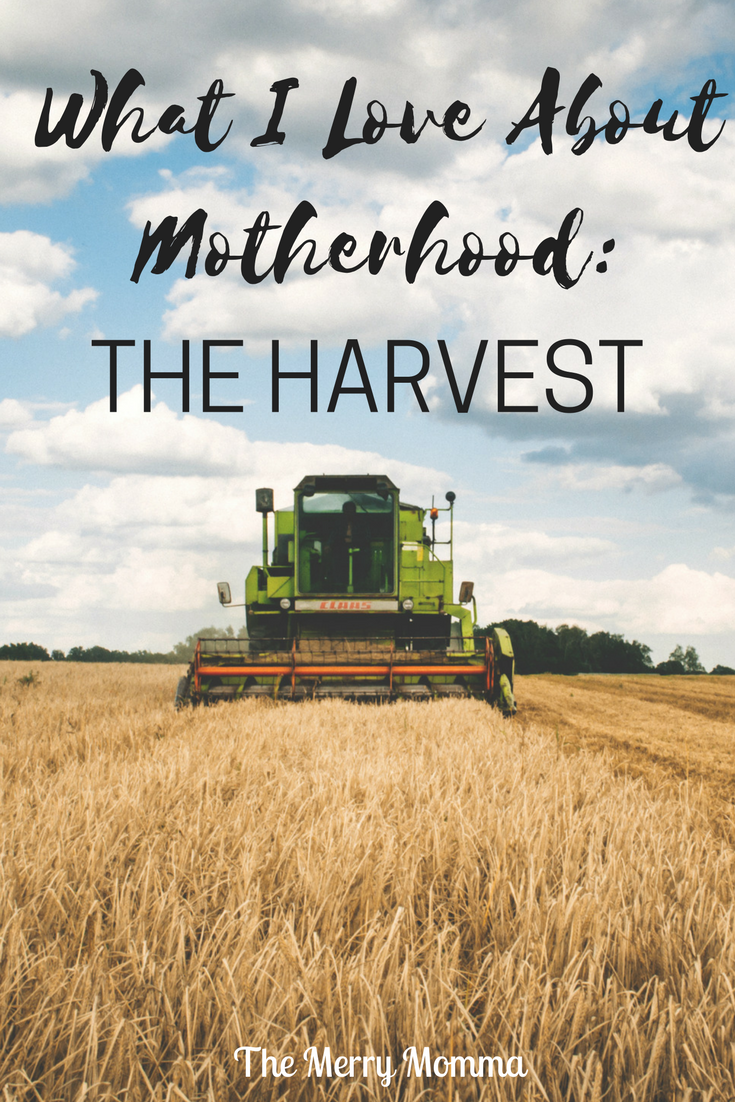