Rice cereal is commonly suggested as a good first food for babies, and moms are often encouraged to start feeding it to their babies around the 4-month mark.

While we opted not to start any kind of solid food until after six months with both our boys (here’s why), we did start our first baby with rice cereal.

From our experience with him, plus what I’ve come to learn about rice cereal since then, we have chosen to completely skip the rice cereal this time around.

Here are the reasons behind our decision and what we have chosen to do instead: 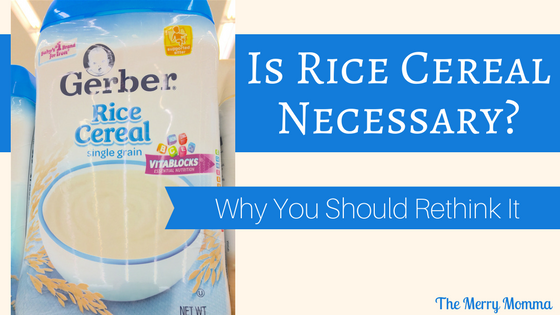 5 Reasons to Skip the Rice Cereal

Infant rice cereal is basically just refined white flour. I try to avoid processed food as much as possible, including in my babies’ food. Our (mostly) real food diet does not include white rice, so neither will my baby’s.

Related Post: How to Cook Real Food on a Budget

The healthiest, most nutritious food is whole, unprocessed, fresh, and without any fillers or added ingredients.

To make rice cereal, however, the whole grain of rice is first stripped of its most nutritious part – the outer shell – and processed. Later, vitamins and minerals are artificially added back in to salvage some of the good that was taken out of it.

Babies’ first foods should be fruits, vegetables, and whole grains. Rice cereal is none of those things.

(Note: There are whole grain infant cereals available. This is definitely better than white rice cereal. However, I still prefer to make my own at home.)

2. It contains fewer nutrients than other first foods

Infant white rice cereal is little more than empty calories. These empty calories are replacing more nutrient-dense foods like fruits, vegetables, and breast milk. Yes, there are “fortified” and “enriched” rice cereals, but we believe it is better to get those vitamins and minerals from real food sources whenever possible.

Frank Greer, M.D., FAAP, past chair of the AAP Committee on Nutrition and professor of pediatrics at the University of Wisconsin at Madison says,

“For a baby’s first food, rice cereal is not as nutritious as other food options and only became popular in the past 30 to 35 years because it was thought to be the least allergenic of the cereals, Dr. Greer noted. … The Academy does not recommend rice milk for infants. The Academy said there is no medical evidence at the present time that introducing solid foods in any particular order has any advantage for infants. No matter what food is introduced first, give infants one new food at a time and wait two to three days before starting another.”

Many people introduce rice cereal first because their baby cannot handle anything thicker yet. This is a sign they’re starting solids too early. If you have to thin baby’s food down to little more than a liquid, you don’t need to be feeding baby food at all. Wait until he can handle soft solids, and you won’t even need the rice cereal.

(Read more about why an increasing number of doctors, researchers, and nutrition experts are now recommending parents wait until six months to start solids.)

Other parents introduce rice cereal first because they have been told that baby should start with bland food. This recommendation has become widely refuted.

We now know that if breastfed, baby has already been exposed to a variety of tastes and flavors from the breast milk he is consuming.

Plus, some experts say that starting your baby on flavorful foods early discourages pickiness later. And what parent doesn’t want that?

4. There are better, more natural sources of iron

The most common reason many moms start feeding their baby rice cereal is that they have been told their baby will be iron-deficient without it.

However, for the vast majority of healthy, full-term babies, this is a grossly exaggerated possibility, one that can easily be solved by introducing real foods that are naturally high in iron.

See below for more on this topic as well as a list of good iron-rich first foods.

5. It can make the transition to solid food harder.

My final point is based on our experience with our first baby, Aidan, and I will admit right off the bat that he didn’t handle any transitions well. Not the bottle, not food, and not the sippy cup. So it may be unfair of me to attribute any of his resistance to the rice cereal.

(By the way, these bottles were the ONLY ones he would accept.)

But I do know that he did NOT like the rice cereal and fought us hard. I pushed it for a couple of weeks before I tried something else. Once I tried some actual food, he loved it all.

Our second baby, Andrew, has taken to solid food right from the start. Again, I’m comparing apples to oranges here (rather, Aidans to Andrews), but I can’t help but think that Aidan simply did not like mushy, tasteless, chunky milk, and I can’t say I blame him.

Why force him to eat something so bland when I could offer him a rich array of wonderful tastes and flavors available in real food?

What We Did Instead

If we didn’t use rice cereal as a first food, what did we introduce first? Fruits, Vegetables, and whole grains, baby!

Andrew’s first foods were avocado, banana, and homemade applesauce. If it had been fall or winter, I would have made pumpkin or squash, which Aidan loved!

For whole grains, I like to make my own brown rice cereal. I do this by grinding some brown rice with my Baby Bullet milling blade.

I also like to make oatmeal. You can mill the uncooked oats with the milling blade and then cook for a thinner oatmeal cereal, but I haven’t found that to be necessary. I just cook the oatmeal (using breast milk) until it’s very mushy.

Both the brown rice and oatmeal are great combined with fruits and veggies and are better alternatives to white rice cereal because they are rich in protein, essential fats, and a wide variety of nutrients.

What About the Iron?

This is what everyone says when you start talking about delaying solids until after six months. “What about the iron?” They talk as if baby’s iron stores are just going to suddenly dry up at six months. I saw one mom write in a forum that iron stores are “mostly depleted” by six months.

This is not the case, especially for babies who are exclusively breastfed until six months.

If he has been exclusively breastfed for his first six months, he has a great store of iron and does not need iron-fortified cereal to boost it.

The bottom line of my research about iron in babies is this: healthy full-term babies are rarely at risk for iron-deficiency. That is the conclusion that I read over and over again from experts in the fields of pediatrics and infant nutrition.

If you’re still concerned about how much iron your baby is getting, or if he’s been tested and does indeed have low iron, consider trying some of these real food alternatives to iron-fortified cereals:

Rice cereal has been a common first food for babies for many years. Friends, family, other moms, even some pediatricians are still pushing it as the food to introduce first. If you fed it to your baby, don’t feel bad! I did, too!

But I think you can see now why I chose to skip the infant cereal the second time around. It’s processed, nutritionally sparse, bland, and simply unnecessary. All the things that I don’t want in my family’s diet, including (especially!) the baby’s.

Did you do rice cereal with your kids, or did you skip it? Is there a benefit to rice cereal that I have overlooked – one that can’t be found from real food sources? I’d love to hear your thoughts!

More in the “Feeding Baby” Series: 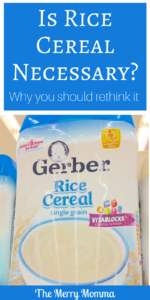