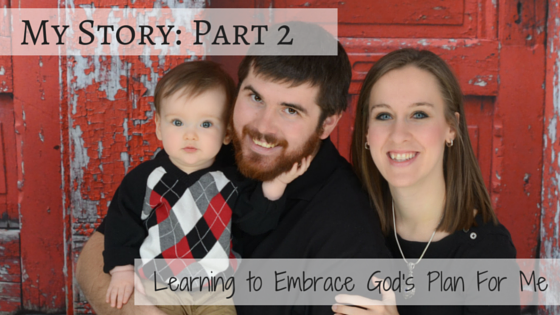 As you know, I’ve started a blog called “The Merry Momma,” which I fill with my reflections and experiences learning to be a joyful mother. However, I’ll let you in on a little secret. There was a time in my life when I wasn’t sure I even wanted kids!

**Links in this post may be affiliate links. This means that if you click that link and purchase the product, I will receive a small compensation. I am, however, committed to honestly assessing the products mentioned. My opinions are my true feelings and are not affected by my participation in the program!**

Growing up, I guess I always assumed I would get married and have a couple kids, because that’s what people do, right? When I started dating my husband, I knew he loved kids and was eager for some of his own. When we got married, that was a solid part of the deal. By our first anniversary, he was more than ready to start a family, but I was in the middle of graduate school, so we waited. After I graduated, I wanted to find a job and establish a career first, and so we waited. After a year of unsuccessful job-searching, I said, “I’m just not ready yet.” And so we waited. Throughout all this time, my husband was patiently waiting for me to be “ready,” but all the while I was secretly thinking that I liked things the way they were, just the two of us. I wasn’t really sure I wanted the responsibility and work of kids. I enjoyed my freedom and my relatively care-free life, and I didn’t really want that to change. Plus, I had big career goals, and kids would just get in my way, right?? Basically, I was just too selfish and self-absorbed.

Then one summer, a couple of things happened that started to change me. First, to make a little extra money for us, I worked as a “mother’s helper” for a good friend of ours who has four children. Many of our mutual friends were concerned that helping with four kids would make me run for the hills and never want children, but just the opposite occurred. Yes, it was often loud and messy, and yes, I went home completely exhausted at the end of the day. But I also saw how fulfilling raising a family could be, how much joy there was in that home, and how much love was shared between them.

by Priscilla Shirer. As I mentioned in part 1, that book changed my life in many ways. This particular change came from the section “Loving My Children.” I almost skipped this section, actually. I thought, “Eh, I don’t have kids, this doesn’t pertain to me.” But something in my spirit stopped me, and I decided to read it for future reference. I ended up reading the entire section in one sitting, and something inside me shifted so dramatically I can’t even explain it.

In the first chapter of this section, Shirer says,

“…our principal charge and mission as parents is to send our boys and girls into the world as young people who bear God’s spirit, who are purposeful about His mission for their lives, and who are intent on being His agent for change on the planet. They are ‘like arrows … in the hand of a mighty man’ (Psalm 127:4 KJV)—sharpened, directed, and sent forth into the world to accomplish the tasks for which they were divinely created. This is your resolution as the mother. And it won’t just happen on its own.”

I could quote from this section all day, but that’s the main idea. For some reason, I had never really contemplated the eternal ramifications of motherhood. I had only thought about the daily chores and challenges. All of a sudden, though, it clicked for me that while I was desperately trying to find a purpose through a career, here was the greatest occupation that I could ever have! I realized that while I, as one person, can accomplish great things for God’s Kingdom, as a mother raising Godly men and/or women, my reach and influence could grow exponentially! This one insight forever changed the way I looked at motherhood and children. And a few months later we were pregnant.

The Merry Momma is born!

I wish I could say that after such a revelation motherhood has been a constant delight, but every mom out there would see right through such a bald-faced lie. Being a mom is tough work at best, and utterly overwhelming at worst. I love my son, but there have been days that I just wanted to quit! When he was about six months old, I found myself in a pit. A pit of resentment, fatigue, and overall discontentment. The daily routine of motherhood was wearing on me, and I felt stuck. After struggling with this for a few months, I was reminded that joy and contentment are a choice. At that moment, I resolved (again) to choose joy. I resolved to embrace my new role as mother and live with a spirit of contentment. I resolved to savor this season of life and fulfill my purpose in it. I resolved to be … a merry momma!